I am afraid that some amount of doubt may have crept into this project since my last post on Wendell Berry and his definition of community.  My argument in that post was simple: it would be good if professionals, and those who train them, might spend at least a few moments thinking through the implications of Berry’s ideal community along with his critique on modernity — both are described in his 1969 essay, “The loss of the future.”

The doubt crept in after I took my own advice and re-read Berry’s 2014 essay, “Our deserted country,” which can be found in the 2015 collection entitled Our Only World.

The essay contains the following definition of vocation:

The idea of vocation attaches to work a cluster of other ideas, including devotion, skill, pride, pleasure, the good stewardship of means and materials.  Here we have returned to intangibles of economic value. When they are subtracted, what remains is “a job,” always implying that work is something good only to escape: “Thank God it’s Friday.”

If it took roughly 20 pages to question modernity’s prudence in 1969, you can bet that it takes quite a few more when Berry wrote “Our deserted country” 35 years later.  The situation has not improved.

In both essays, Berry’s lament maintains a steady focus on the disruption and displacement of rural farming communities caused by the expansion of industrial agriculture.  In 1969, the concern seemed centered on the individual specialist as a purveyor of technical knowledge who fails to consider the broader consequences of his/her work. This led to disruption.

In 2014, the critique is only amplified with a shift in focus to the industrialization of the specialist.  This resulted in an almost total desertion from the countryside, as evidenced by the hours one might spend driving through the corn belt without seeing any people.  The intensity of production and economies of scale have only exacerbated the disconnect between individual, community, and place: 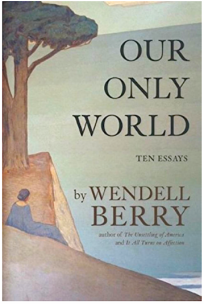 Replacement of workers by machines becomes more serious when it is enabled by the degradation of work.  We have ignored the limits between the compatibility of labor-saving and good work.  And we have degraded almost all work by reducing the generously qualitative idea of “vocation” or “calling” to the merely quantitative integer, “a job.” The purpose of education now is to make everybody eligible for “a job.” A primary function of politics is “job creation.” Persons deprived of work that they have loved and enjoyed and performed with pride are to consider their loss well-remedied by some form of “welfare” or “another job.”

Berry’s definition of vocation and accompanying commentary seems to leave us with three basic options:

(1) Disavow modernity!  I personally tend to lean heavily in this direction, but my day-to-day lifestyle — and certainly the way I earn my livelihood! — makes it sound almost silly to say out loud.  At the same time, I can’t imagine how maintaining our current trajectory will get us there any faster or in any better shape.

But there is always a tendency to fall into a trap when we read Wendell Berry and assume that nothing short of a wholesale dismantling of the modern military industrial complex will help to restore our relationships with our work and with each other.

(2) Disavow Wendell Berry!  Yes, he is wise and infinitely quotable. But the lost livelihoods that seem to cut him (and me) so deeply have paid dividends in terms of broader economic gains.  Just give the AI a little more time to fully develop, and all of these so-called “problems” will finally be solved.

(3) Embrace vocation. The good stewardship of means and materials would be a good place to start, but, again, that is my personal bias. More importantly for this discussion, as members of the academy, we can also add to Berry’s definition. The virtues required for academic citizenship [1] are foundational to what we do, and ensuring that these virtues remain integral to our work as educators is no small feat.

One final question that I would pose to my colleagues who focus on professional education is this: does embracing vocation (as defined by Berry) represent a radical departure from our historical roots and the essence of professionalism?  In other words, is my attempt to conflate professionalism with vocation misguided? Goodness, I hope not!  But here are two examples, one from the “real” world and one from the academy, that support my position.

First, consider the following excerpt from the American Society of Civil Engineers vision statement for the year 2025:

Entrusted by society to create a sustainable world and enhance the global quality of life, civil engineers serve competently, collaboratively, and ethically as master:
– stewards of the natural environment and its resources;
– leaders in discussions and decisions shaping public environmental and infrastructure policy.

The second example is one that I have written about before, but is worth repeating.  The eminent sociologist of the professions, Eliot Freidson, includes the following as the final defining element in his fivefold typology of professionalism:

an ideology that asserts greater commitment to doing good work than to economic gain and to the quality rather than the economic efficiency of work.

The professional ideology of service goes beyond serving others’ choices. Rather, it claims devotion to a transcendent value which infuses its specialization with a larger and putatively higher goal which may reach beyond that of those they are supposed to serve.

Of course there is always the gap between vision and reality… and don’t forget theory and practice! But, unless we are prepared to disavow professionalism, I don’t think an emphasis on vocation (as defined by Berry) within professional programs — whether they are undergraduate, graduate, or six-month certificates — represents anything close to “mission creep.” At the end of the day, we have to ask ourselves what we are doing if we aren’t trying to close that gap between the ideal and the real. Closing that gap is what all true professions strive to do.  Is there any chance we might accomplish any of this without vocation? I have my doubts.

[1]. See Mark Schwehn’s chapter on “Good Teaching” in Vocation across the Academy.