Skip to content
HomeAvoiding the BS: Education as a Relationship

What if we stopped thinking of education as an object — a system, a process, a collection of entities — and started to think of it as a relationship? What if it is meant to be nurtured and cultivated, rather than quantified and evaluated?

This was the question posed by a former student of mine, in a discussion on Facebook about Christian Smith’s recent Chronicle essay titled “Higher Education is Drowning in BS.” For those who missed it, Smith’s jeremiad is a 22-item list of everything that is wrong at the present moment, from “hypercommercialized college athletics” to “disciplines unable to talk with each other.” But one can agree with practically every item on Smith’s list and miss the larger point: that these problems stem from a failure to treat education as a relationship.

In our Facebook exchange, my former student comment that the problems that Smith identifies may be “the harvest of the ‘common grievance over parking.’” He was referring to a famous comment by Clark Kerr in his The Uses of the University. Kerr’s words that lead up to that oft-quoted phrase are also worth noting:

The multiversity is an inconsistent institution. It is not one community but several… A community should have a soul, a single animating principle; the multiversity has several… Flexner thought of a university as an organism. In an organism, the parts and the whole are inextricably bound together. Not so in the multiversity — many parts can be added and subtracted with little effect on the whole or even little notice taken or any blood spilled. It is more a mechanism—… a mechanism held together by administrative rules and powered by money…. Hutchins once described the modern university as a series of separate schools and departments held together by a central heating system… I have sometimes thought of it as a series of individual faculty entrepreneurs held together by a common grievance over parking (14–15). 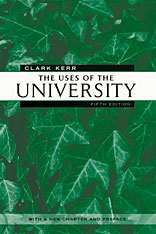 wrote this decades ago, so I resonated with the words of another former master’s student in our Facebook discussion: “It still amazes me that we can talk so coherently about these things and practically do little about them. Are we all just clutching our departmental pearls?”

Yes, “we” can and do clutch various idols in understanding and enacting our educational efforts, perhaps even unwittingly. But, on the other hand, Smith also concludes that “most of the BS is produced not by pernicious individuals, but instead by complex dysfunctions in institutional systems.” So, no, it’s not just “us”; institutional (and institutionalized/routinzed) systems are culpable as well.

Are some institutional systems more dysfunctional than others? It seems Smith thinks so, and I tend to agree. I suspect that many of Smith’s 22 examples of higher education BS are more easily and more reasonably attributable to large, research universities. In addition to the items that I quoted above, he mentions “the institutional reward system that coerces graduate students and faculty to ‘get published’ as soon and as much as possible, rather than to take the time to mature intellectually and produce scholarship of real importance.” He also refers to “the standard undergraduate student mentality . . . that sees college as essentially about credentials and careers (money), on the one hand, and partying oneself into stupefaction on the other.”

I will add, however, that some of the higher education BS that Smith identifies may be as present at other types of institutions in addition to larger research universities. For example, many institutions would have to admit to “undergraduate ‘core’ curricula that are actually not core course systems but loose sets of distribution requirements,” to “shifting of the ‘burden’ of teaching undergraduate courses from traditional tenure-track faculty to miscellaneous, often-underpaid adjunct faculty,” or to “the delusion that what is important in higher education can be evaluated by quantitative ‘metrics.’” Still, when taken as a whole, smaller private institutions are qualitatively different from those that seem to be most in view in Smith’s polemic.

Two more thoughts, and then I’m done. First, a question: How does one come to the conclusion that certain things — in this case, higher education practices and priorities — are BS (or not)? Perhaps it has something to do with one’s sense of the way things should be: the good and the right. To neglect to consider such things strikes me as vacating a critical element of our educational leadership. We need to attend to the ways in which things are “not the way they’re supposed to be” (to modify the title a bit of Neil Plantinga’s book). In this regard, Smith’s essay does a great service by inviting us to consider examples of higher education done badly or wrongly.

And finally, I wonder if David Cunningham’s work on the “callings of colleges” may help us to navigate these conversations and to preserve and pursue appropriate actions. If colleges have callings (just as persons do), what is the nature of those callings, and how are those callings best enacted? For example, a married person is called to love and honor one’s spouse and should attend to appropriate ways of doing so (and eschewing inappropriate ones). So perhaps a college or university has a calling, not only to be and to do particular things, but also to align its actions, practices, and offerings with that calling. Smith’s essay seems to take its departure from particular ideas about the callings of colleges, as well as their tendency to allow their callings to be seduced by other suitors. The more time we spend thinking about the true callings of our institutions, the less likely we are to find them “drowning in BS.”